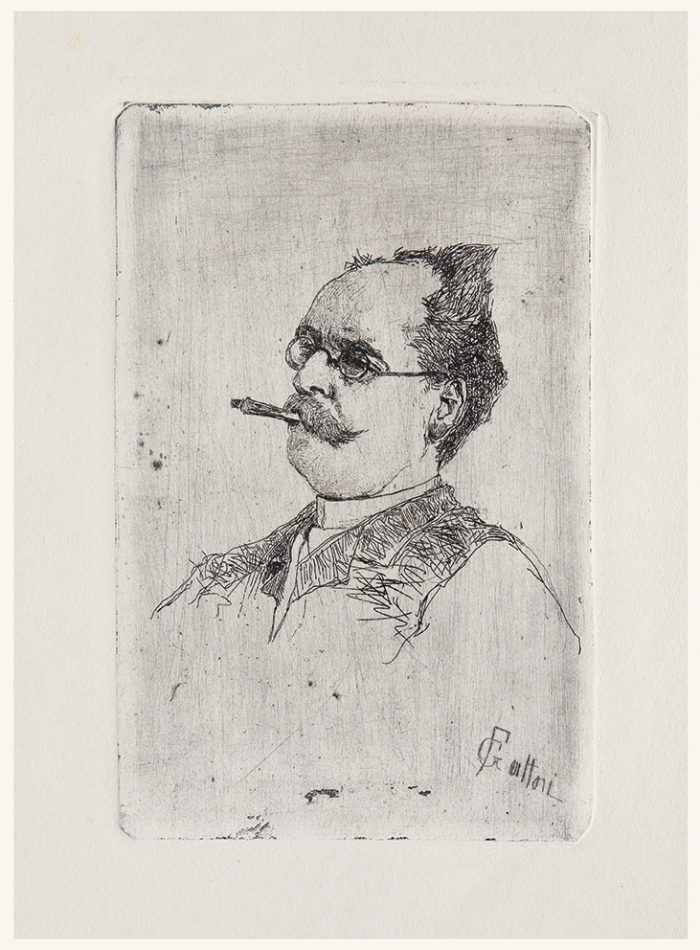 
Signed in the plate at bottom right GFattori

This is an extremely rare print. Baboni-Malesci in their work of 1983 just mention the print, without reproducing any impression.
The plate also is unknown. One of the very few existing impressions was in the Franconi collection, which is now at the Accademia Carrara, Bergamo; see A. Baboni, Le Acqueforti di Fattori nella Collezione Franconi, Florence 1989, p. 213.

Giovanni Fattori, possibly the most important painter of the nineteenth century in Italy, received his first instruction in drawing in Livorno. In 1846 he moved to Florence to attend the Academy. During the 1850s he joined the innovative artists, called ‘Macchiaioli’, who met in Florence at the Caffè Michelangelo and were champions of a new technique and style to contrast the conventional academic language. During those years, he still produced works that could be attributed to the historical-romantic school but his interest in studying from life also extended to landscape painting and the military life of the day became the subject of his first experiments in painting using the “macchia” technique. In 1867, after the death of his first wife, Fattori frequently stayed in the Maremma region, which became the ideal backdrop for his works. Fattori began etching in the early 1880s, when he was nearly sixty; quite soon he was able to appreciate the difference of expression he could achieve using this new medium. A real ‘peintre-graveur’, he improved  with etching his research on light and essential shapes in reality.