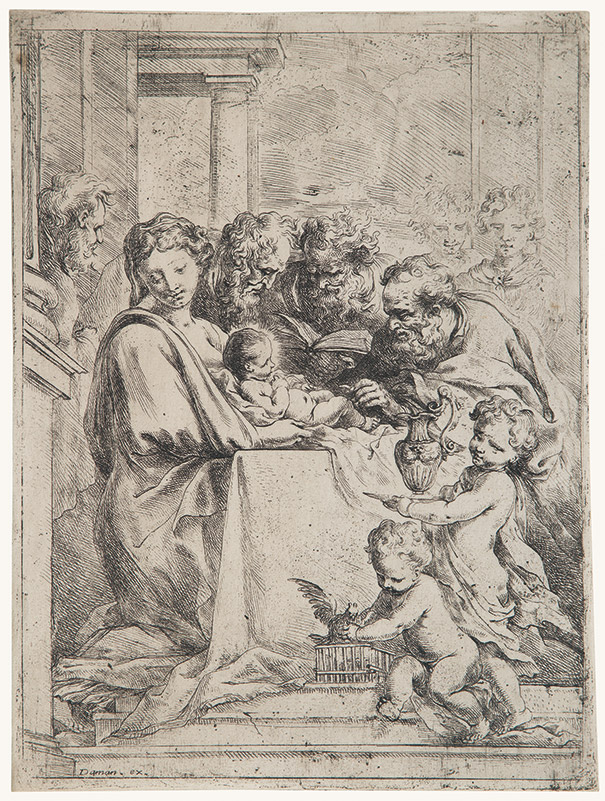 
Published by Daman, whose name is inscribed in the lower left corner

Fine atmospheric impression of this rare etching. The second of three states, sharp in every detail. Printed with a warm tone on laid paper with a contemporary watermark: halfmoon surmounted by a Greek cross.

Early impressions of this print with nuanced contrasts of light and shade are extremely rare.

Bartolomeo Biscaino's life was cut short by the plague, and little is known about him. He first trained with his father, a landscape painter. In the late 1640s he entered the workshop of Valerio Castello. Biscaino's early paintings strongly recalled his master's style, but his forms were softer, his brushstroke broader, and his choice of colours more delicate. Curving draperies and sweetness of expression typified Biscaino's manner.
Scholars often date Biscaino's canvases on the basis of his forty catalogued etchings, and he remains best known for his drawings and prints. Giovanni Benedetto Castiglione influenced the iconography and technique of Biscaino's etchings. In his rendering of animals, figures, and naturalistic settings, and the play of light and shade, Castiglione also provided an important example for Biscaino's later paintings.