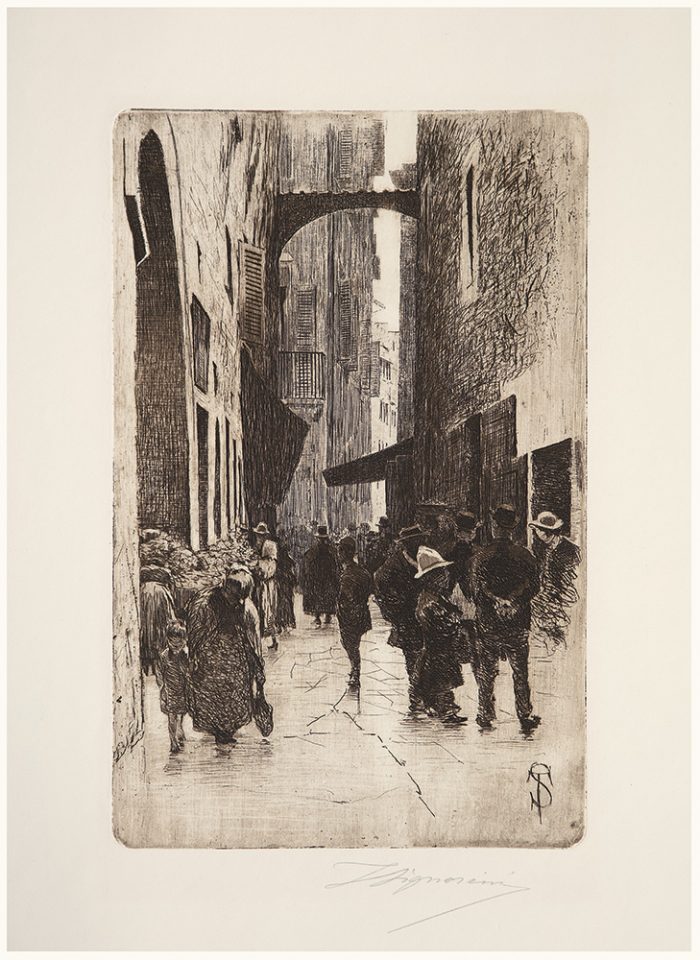 
Monogrammed at the lower right of the plate TS and signed below in pencil by the artist T. Signorini. Only state.

Very fine impression, printed with a rich tone. Selectively wiped in certain areas to enhance the fall of light on the composition, as in the centre of the paving and the hair and clothes of the elderly lady on the left.

This sheet, which belongs to the famed series of eleven etchings depicting the Mercato Vecchio, Florence, dates from around 1886. During the decade that followed, the buildings depicted here were reprehensibly demolished. As a result the Jewish Ghetto disappeared as did the entire fabric of the medieval Mercato Vecchio. In its place rose the Nuovo Mercato Centrale, which was inaugurated in 1874. Although this date appears on the cover of the portfolio in which this series of etchings was originally collated, in a letter of 1892 addressed to the President of the Florentine Accademia, Signorini confirmed that they were executed in 1886. The chronology is consistent, since it is well known that the etchings were largely based on his earlier paintings devoted entirely to views of the Mercato Vecchio.

Signorini belonged to the circle of young artists that gathered regularly at Caffé Michelangelo in Florence. Along with Giovanni Fattori and Silvestro Lega, he was one of the leading exponents of the Macchiaioli, the Italian variant of the French en plein air painters. Signorini was a passionate free spirit, who spent most of his life wandering in Italy and Europe. He frequently travelled to Paris and London, to exhibit and sell his works, at the Royal Academy and the Grosvenor Gallery in London, and through the dealers Goupil and Reitlinger in Paris. In Paris Signorini met Corot and Courbet, he came into contact with Boldini and De Nittis and became interested in the work of Manet and Degas. Like the French masters he was fascinated  by the expressive potential of printmaking and experimented with new printing techniques.

Other works of the master
Mercato vecchio, colonna della Dovizia