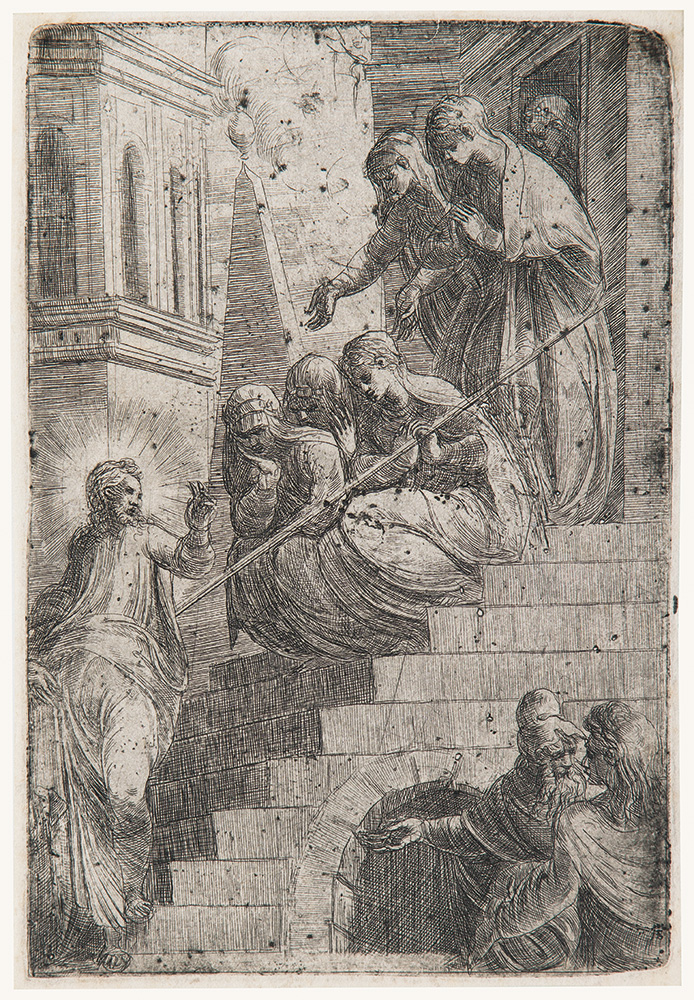 Fine impression of the second state, with the new interventions on the plate; Meldolla has engraved some vertical lines to create the profile of the face of Christ, completing the design of the cheek, suggested in the first state by only two contiguous lines. The effect obtained is a more oval and elongated face; other hatches have been added to the most shaded areas of the composition.

Printed on paper with watermark ‘Anchor with single lined arms and shank in circle with lozenge quatrefoil’ (Woodward no. 179, p. 113, Venice c. 1566).

The impression has a rich plate-tone that gives special atmospheric effects, similar to those that the artist gets in his chiaroscuro prints and drawings.

Our impression is early, with wiping scratches, before the appearance of the two holes in the upper and in the lower side of the print; the oxidation spots, typical of the early impressions (due to the plate material, probably pewter) are still much evident.

In fine condition, with margins all around.

In this sheet Christ is depicted with his left hand raised while he stands in front of a staircase, where some women are seated in the act of listening with devotion to his words. Other female figures, at the top of the staircase, invite Christ to rise.

In the lower part of the composition two disciples converse, and one of them points with his right hand to the Messiah. It is probable that the composition refers to Matthew’s Gospel (15, 21-8).

Richardson dated the sheet to the second phase of Schiavone activity, around 1541/44, when he is very close to Parmigianino’s style.

The scholar pointed out also the Central Italian influences on the artist in particular Francesco Salviati, as we can see in the faces of the female figures in the upper part of the composition.