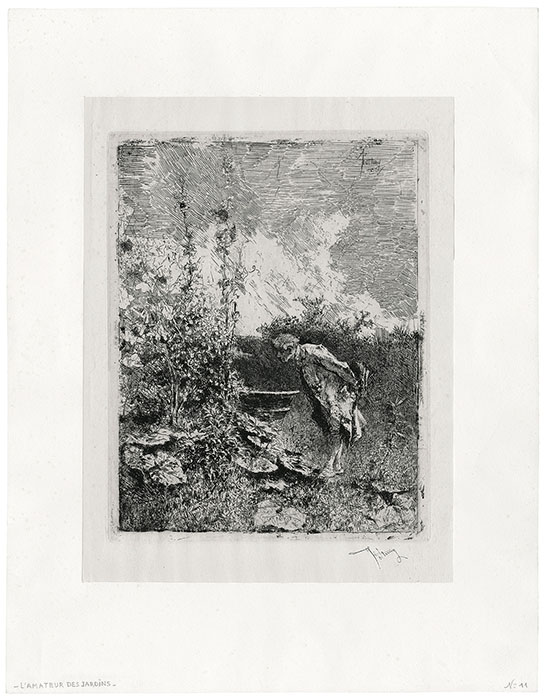 
In this print we are immersed in a rich spontaneous garden. Short parallel sections are distinguished in the sky area, others more irregular and intertwined in the vegetation. Nature is certainly the protagonist of this composition as well as the dazzling sunlight. The vegetation develops in an almost disorderly way until it occupies half of the composition. In this whirlwind of leaves and stems we see a man caught in profile in eighteenth-century clothes (tight knee-length trousers, richly draped tailed jacket, hands placed behind is back clutching a hat) who protrudes forward driven by the curiosity to see what there is inside in a tall terracotta vase. Above on the right, in the plate, the signature Fortuny.

Etching
276 x 216 mm, sheet 324 x 247 mm
Third state of three, III/III
Our impression belongs to the second edition 1878, without title and number but with the author’s signature stamp at the bottom right. Fine impression with strong inking, pulled on japan. The print is applied along the left side to a thick white sheet, page from an artist's album, inscribed in pencil on the lower left L'AMATEUR DES JARDINS, on the right No. 11.
In very good condition.

Fortuny, who was born in Spain and orphaned at an early age, was largely self-taught. He was raised by his grandfather, who sold wax figures modeled by the young artist. He later entered the studio of the sculptor Talarn Ribot in Barcelona, while also attending the Academy and frequenting the studio of Claudio Lorenzale. Fortuny went to study in Rome in 1858. In 1860, he interrupted his Roman stay by accepting a commission from the Consul General of Barcelona to paint a battle picture of the victory of Spain in Morocco. Striving for picturesque local colour, he travelled to Africa several times. Fortuny visited Paris in 1866, where he studied with Gerome and was influenced by the work of Meissonier. He returned to Spain in 1868 to study Goya. Between 1869 and 1874, he travelled to England, Paris, Seville and Granada, but chose to remain an expatriate, spending the rest of his life in Naples and Rome, where he died. Fortuny was an excellent colourist and had a strong influence on the watercolorists of the late 19th century. He was also a prolific and accomplished printmaker.