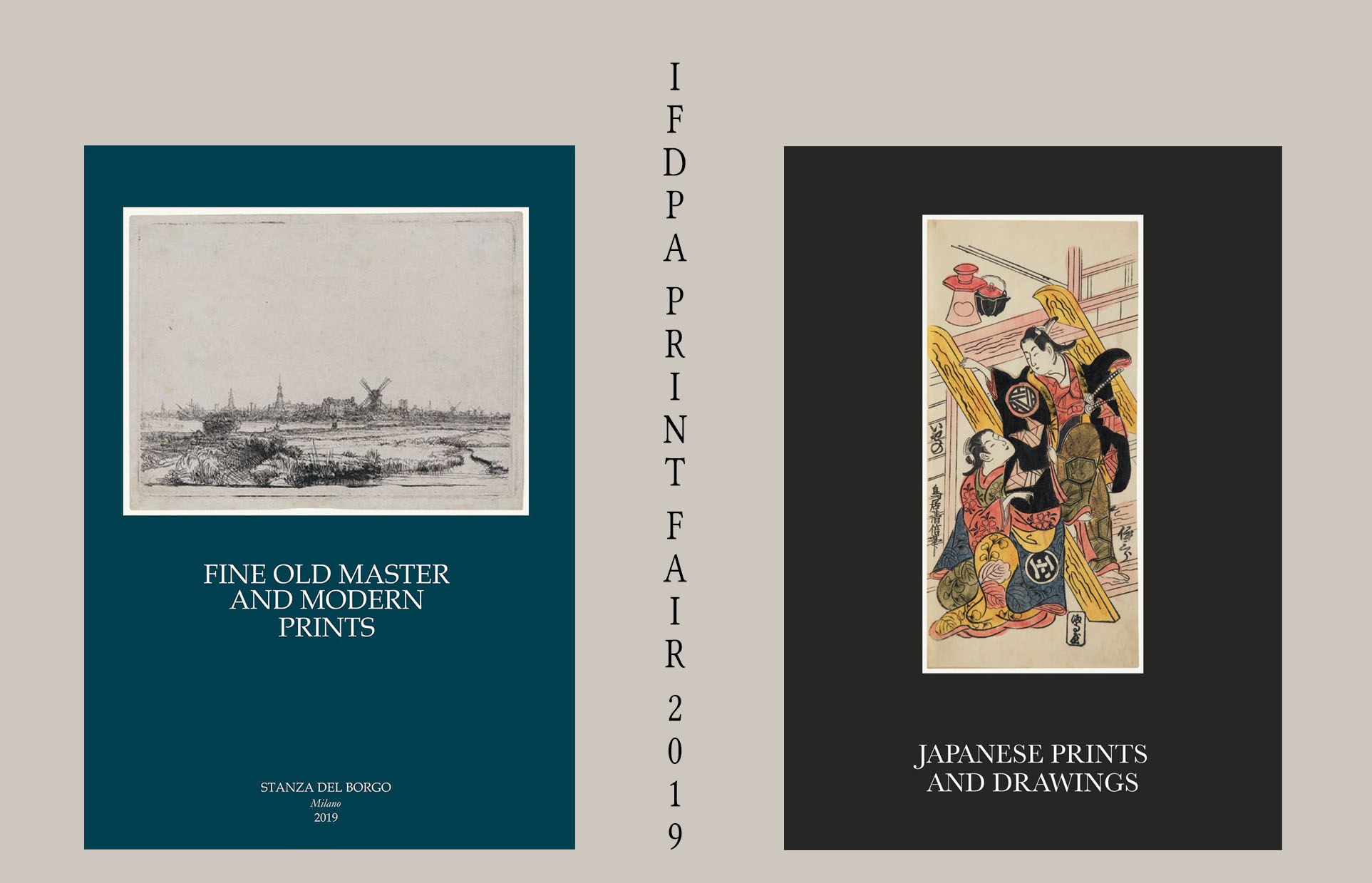 I am pleased to announce that Stanza del Borgo will exhibit at the prestigious IFPDA Print Fair, organized in New York by the International Fine Prints Dealers Association (IFPDA), October 23-27, in the new River Pavilion, Javits Center, NYC.

On the occasion of this exhibition, I will present the new acquisitions of the Gallery in two catalogues:

Silvana Bareggi, with the passion that also derives from her studies in History of Art and from a thesis on the graphics of the Procaccini family, organizes an exhibition a year accompanied by illustrated catalogues with critical entries, often with the contribution of Italian and foreign researchers, with comprehensive and up-to-date bibliographic information.

Stanza del Borgo deals with the prints of the main Old and Modern Masters; in this exhibition will be presented, among others, works by Martin Schongaur and Albrecht Dürer: by him the rare impression of the etching the Sudarium held by one Angel and an extremely fine engraving, the Virgin and Child with the pear. By Lucas Van Leyden I’ll show a very fine impression of the Virgin and Child with two Angels and, by Rembrandt, one of his finest views, Amsterdam seen from the Kadjik. There will be present also works by Peter Bruegel the Elder, Camillo Procaccini, Jacques Bellange, the Tiepolo family and Goya. For the Nineteenth century the artists represented are Mariano Fortuny y Carbo, Paul Gauguin, Camille Pissarro, James Abbott Whistler, Henry Toulouse-Lautrec, Otto Mueller, Giovanni Fattori, Telemaco Signorini, Luigi Conconi and Giorgio Morandi.

The first works are by the masters of female beauty of the second half of the XVIII century: Torii Kiyomasu II and Harunobu. By the last artist we mention a fine chuban print: the Love Letter. There will also be works by Katsukawa Shunko and Katsukawa Shunsho; they are followed by the artists of the bijin-ga in the golden age of polychrome printing, as Utamaro and Eishi. With the nineteenth century the themes of Ukiyo-e diversified: the popular kabuki theater and the beauties of the pleasure districts were joined by the landscape views, which spread images of the most beautiful places in Japan and of popular life. Our exhibition presents works by the most significant landscape artists: Hokusai and Hiroshige, with many fine examples by both the artists. A section of our catalogue has been devoted to the surimono, the most refined kind of polychrome print produced in Japan in the early nineteenth century, with works by Hokusai, Hokkei, Gakutei and Kunisada. Here we mention only one: the rare square surimono by Hokusai depicting the sumo wrestlers Ki no Natora and Ôtomo no Yoshio. For the nineteenth century will be offered works of the most important artist from the Utagawa School, specializing in theatrical subjects, warrior prints and legendary-historical subjects; including, Kunisada, Kunikiyo II, with the complete series of his Chushingura, and Kuniyoshi. For this artist it is important to point out the rare complete series of the eight women for the eight views in tanzaku format. It is from the school of Kuniyoshi that Yoshitoshi emerged as the last great Ukiyo-e master, who reflects in his bloody designs, in his monsters and ghosts the influence of his master and the crisis of Japanese identity in the era of the Meiji Revolution (1866-1869).
Our exhibition will be closed by a few fine examples of prints by Hasui (1883-1957) the great master of the landscape in twentieth century.