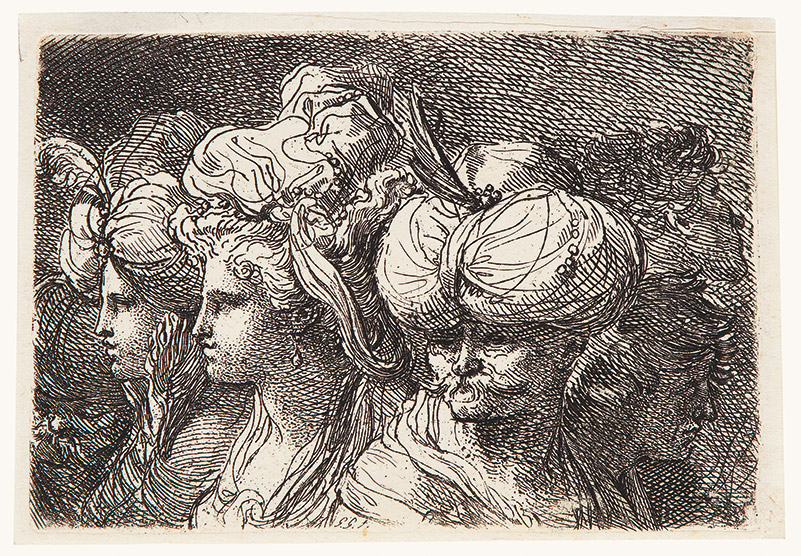 Very fine brilliant impression, richly inked, in the second state of two. Printed on laid paper.
In excellent condition, with regular margins all around.

This rare print was first attributed to Gaetano Gandolfi in 1906 by De Vesme, who knew the impression in the print room of the Biblioteca Nazionale di Parma. Nagler (N. II, 3006) had erroneously attributed it to Ch. G. Geisler.
Fausto Gozzi, in his catalogue of prints by the Gandolfi, published another fine impression in a private collection (no. 15).

Our etching depicts a Capriccio of heads. In the foreground is the frontal head of a man with a moustache, wearing a turban adorned with plumage. The artist’s monogram is inscribed on his shoulder. To his left we see two female profiles with that of an elderly bearded male below; to his right, cast in shadow, are two youthful male profiles.
Capricci di teste were very much in vogue at the time of the Gandolfi, all three of whom grasped the opportunity to create elegantly harmonious groups of heads in their graceful and highly refined drawings and prints. The widespread taste for such images is confirmed reflected by the existence of an album of 23 etchings by Luigi Tadolini (1758-1823), a complete series of which is preserved in the Bibliothèque d'art et d'archéologie Jacques Doucet, Paris (see D. Biagi Maino, 1994, Gaetano Gandolfi’s Capricci of Heads: Drawings and Engravings, in The Burlington Magazine, CXXXVI, no. 1905, June, pp. 375-79).

Gaetano Gandolfi was a Bolognese artist that, with his brother Ubaldo, refreshed the quiet scene of Bolognese graphic since 1760. Both were born in San Matteo della Decima and both enrolled at Accademia Clementina of Bologna where, apart from some short trips, they worked almost in their city. Gaetano, younger six years than his brother, won two medals for sculpture and four medals for his drawings. He spent a year in Venice in 1760 and in 1783 he visited London, maybe after an invite of Richard Dalton who was in Italy finding objects d’art for Giorgio III.
As we said before, Gaetano received numerous commissions for altarpieces for churches throughout Emilia and elsewhere, and also worked extensively as a fresco painter. One of his first important decorative projects was a ceiling fresco of the Four Elements, in the Palazzo Odorici. This was followed by work in several other Bolognese palaces. Very rare and fine were his etchings and aquatint. Throughout his life Gandolfi remained actively involved in the affairs of the Accademia Clementina, where he taught a class in life drawing. Gandolfi was a gifted draughtsman and a fine engraver; his works were highly prized.

Other works of the master
Studies of heads