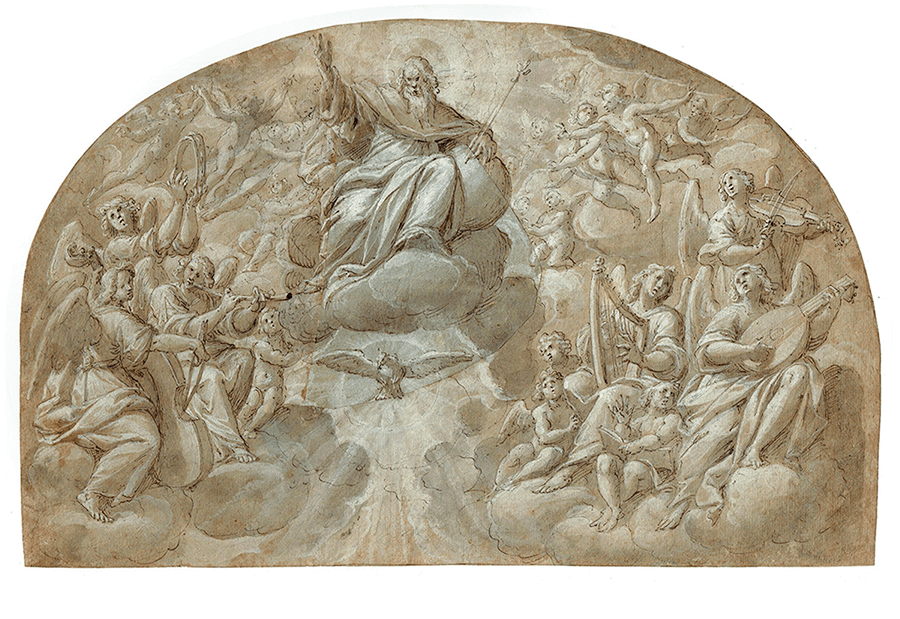 God the Father is represented in the centre of the drawing. In accordance with iconographic tradition, he is seated in the clouds, has his right hand raised in the act of blessing, while his left hand rests on a globe and grips a sceptre. Beneath him is the dove of the Holy Spirit and surrounding him are cherubim, putti, and music-making angels.

The entire scene is bathed in the light emanating from God’s halo and from the dove.

Its technique is the typical and easily recognisable one of Giovanni Mauro Della Rovere, which may be distinguished by the rapid pen lines used to delineate the principal contours of the figures, which are then shaded with ink washes and heightened with white.

At the centre of the drawing one may note the insertion of another piece of paper, one that is bluer in colour. The central sheet includes the area that runs from God’s waist to the dove. This insertion was surely done by the artist, perhaps because he had a change of thought about this part of the composition.

The rapid and free style is that of the matured artist, before his work became characterized by that heaviness and perfunctory quality that marks the drawings of the last decade of his career.

The drawing cannot be connected to any of Giovanni Mauro’s work that is known today.  Its rounded edges make one think that the sheet is a preparatory drawing destined for a fresco in the apse of a church or chapel.

The same figure of God the Father seated among the clouds may be found in two frescoes executed by the artist in the first two decades of the 17th century. These are located in parish churches in the area of Alto Lario, i.e., the northern part of Lake Como. The first is fresco in the presbytery vault of the church of Saints Gusmeo and Matteo, Gravedona, commissioned of the artist in 1608 (cf. Tenchio 2000, pp. 23-25). This fresco also includes the themes of cherubim and music-making angels.

The second fresco is in the central vault area of the Saint Rosario Chapel in the Church of San Giuliano, Stazzona, where Giovanni Mauro worked in 1619 (cf. Tenchio 2000, pp. 41-50).

The flying angel with arms outstretched in the upper right may be seen in a drawing in the Metropolitan Museum of Art, New York (inv. no. 62.119.4; cf. Bean, Turcic 1982, no. 231, p. 231), that represents the Virgin and Child with Saint Domenic, who distribute rosaries to the faithful. The verso of the Metropolitan’s drawing bears the date written by the artist himself, ’19 settembre 1618’.

The same six music-making angels are very similar to those frescoed by Giovanni Mauro between 1621 and 1622 for Bienno’s church devoted to Saints Faustino and Giovita Church in the Province of Brescia (cf. Caviglioli 1989, vol. 37). In particular, the angels playing the violin, the harp and the tambourine make the same types of gestures as those in this drawing.