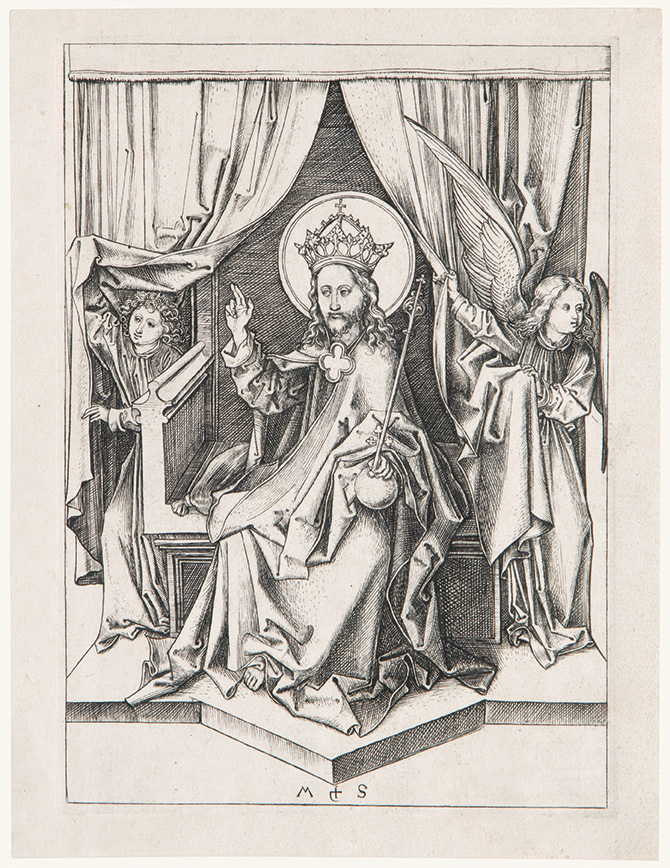 A superb, rich and black, early impression, in parts with burr, before the reduction and before the nail hole in the copperplate. Printed with great clarity on laid paper with watermark Bull’s Head with Staff and Heart(similar to Lehrs watermarks 42; c. 1470). The platemark fully visible, with wide margins (approximately 7-11 mm) on all sides.
It is very rare to find a print by Schongauer in such excellent condition.

Impressions of the first state are very rare. Lehrs records a total of circa 40 impressions of which only 12 impressions represent the first state, all 12 are ranked ***. Lehrs does not record the watermark Bull’s Head with Staff and Heart for this print. However, this watermark is listed by him for early impressions of other prints. In this exceptional quality our print is of the greatest rarity and there is to our knowledge no other impression on the market in similar quality. This is the impression reproduced in the exhibition catalogue by Falke/Hirthe.

The figure of God blessing, holding a scepter and a globe was interpreted on one hand as Christ (Lehrs), on other hand, due to the missing cross in the nimbus, it was interpreted as God the Father (Bartsch/Wurzbach). It is also possible that the artist did not want to distinguish between the diverse identities of God the Father and the Son of God, but to represent both in one figure. That means God is represented in both his manifestations (Hirthe). There is a long pictorial as well as a theological tradition for the fusion of both figures into one, for example in book illumination, as in the representation of Trinity or in the representation of the Deesis in Jan van Eyck’s altarpiece in Gent. By using the formulation of a curtain held open by two angels which allows us to see God enthroned and blessing, Schongauer recalls previous prototypes, perhaps regarded in his times as particularly venerable.