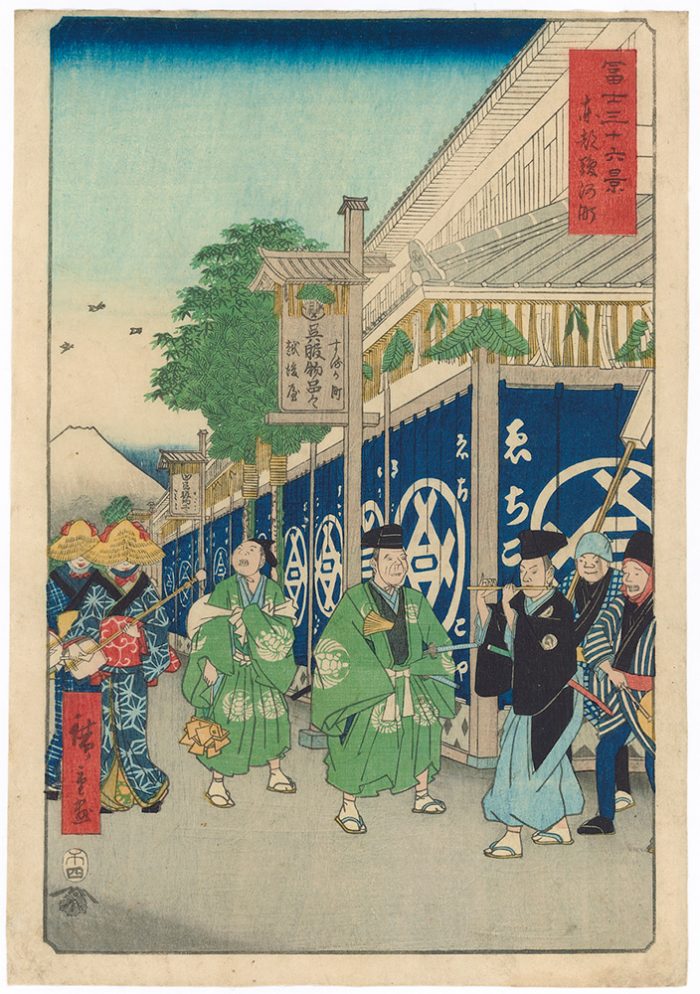 Mount Fuji is seen from Edo's Suruga Street. At the right, there is the corner Echigoya fabric shop, established in 1673. Echigoya started as an itinerant vendor before opening this important shop in Edo in 1683. A cluster of dancers and samisen players is represented in the foreground. They are celebrating the Feast of the New Year, where Echigoya has installed a special decoration. It is a day in which everyone hopes for happiness throughout the year.

In 1852 Hiroshige drew a first series of 36 Views of Mount Fuji, Fuji Sanjûrokkei, in chuban yoko-e format, published by Sanoki. But it is toward the end of his life that the artist began to draw two important series dedicated to Mount Fuji. He draw simultaneously 36 views, to be published in ōban format sheets and secondly a set of 100 drawings for inclusion in several books; but this second work was not been completed, due to the death of its author. The 36 prints were published by Tsutaya Kichizô, one of the best publishers of the time, who has, in 1855, published two series by Hiroshige dedicated to the Tokaido Road. All drawings ready to be published have been subjected to censorship in the spring of 1858 and it is likely that Hiroshige drew the series in 1857 and in the early 1858, and that Tsutaya Kichizô had the project to publish the prints separately but on a relatively short period. Thus a first edition took place in 1858. In the spring of 1859 Tsutaya published again the entire series, this time as an album preceded by a table of contents made by Shumba Santei which contains the title of each of the 36 prints.